Just what will you do for money? 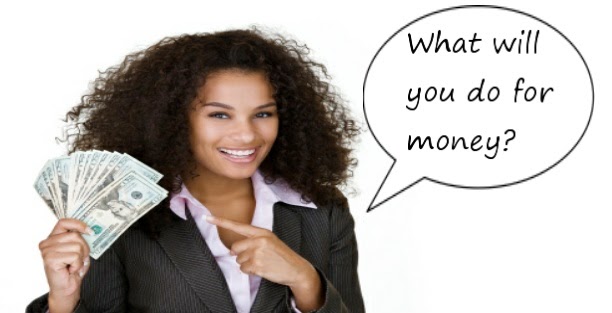 After university the first company I worked in was just a stone throw from my house, and I was living with my parent so the salary was just good.

But I left the company. Why?

It was a boring 8-5pm job, I lived in a closed estate, meaning most of my days is spend around my neighborhood. I felt like I was in prison.

Moreover, I started work in the company just for the pay. It was a family friend's company so I didn't have problem getting a job there. In fact I had worked there during holidays before. But now that I had graduated, I knew I can't live like that. So I stopped work and went to a skill acquisition school. And even while I was not getting a salary, I never regretted leaving the job.

Well you can say it was because I lived with my parent and didn't have responsibilities on my shoulder.

To me, it was just a confirmation that money isn't everything.

I want to work in a place, where I feel useful to myself. Not doing routines that doesn't inspire me.

"What you want is Money and Meaning"- Oprah Winfrey

From my conversation with some of the staffs I realized how frustrated some of them were, though for a different reason. It was a production company, those in the production section felt unappreciated, because it was the marketers and sales reps that get the glory based on the money they made for the company.

So they complain, grumble, murmur, gossip and worry. Some have their dreams, what they hope to achieve but the fear of being jobless and starting a new career paralyzed them.

This is the same way many people because of the fear of a lack of monetary security have sacrificed their dreams, dignity and reputation.

Never allow money to be the only reason you start a business, a career or apply for a job.