My Chronicle as a corper in Benue State. 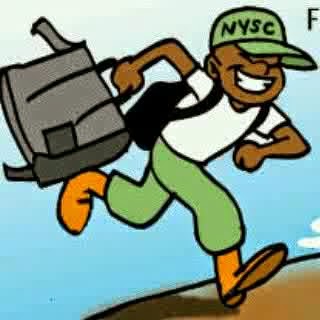 My chronicle of NYSC started when I asked a friend to help me check my name on the Nysc list. For my mind I was expecting him to say Oyo or Ogun since I had two staffs of Nysc who had promise to do something, so when my friend was like "its BN" l was like BN bawo? What does that mean? I could hear him asked people around him and they said it's Borno!....wetin?

Borno for where? Blood of Jesus! For the first time the reality of boko haram struck me. With tears I told my mum, it was a serious issue that night. My Mum immediately started feeling a running stomach in short she had to use the toilet trice that night. I kept telling myself, why Borno? Why would Nysc keep posting innocent people to deadly place as a sacrificial lamb.

After we called some friends and family members to know the way forward, I and mumsy concluded we would go to Nysc office the following day to complain. And if at all i have to go for the orientation camp then it must be by flight. Who want to take a stroll on boko haram road? God forbid bad things

...so I took my phone to check the NYSC website for the camp address, to my greatest suprise 'BN' actually stand for Benue and not Borno as i was told. Wow happy is an understatement. That night I learnt how to feel a genuine concern for people living in the north.

After camp in Wanune, I was posted to Markurdi, the state capital. I was vexed because not only is the state not going to pay state allowee to those of us who were posted to private establishment, the school where I was posted said they would pay corpers N3,000 of which to even pay the money was a big deal.

.....Well I will tag my complains as my story for the gods.

These good memories will stay with me.

- In camp I joined the Red Cross Society to escape the soilders stressful activities, luckily I was good in the training session, my Red Cross coordinator recommend me and four others to be posted to the State capital. I wrote the first aid professional exam in camp and came out top (the cordinator told my colleague, so he told me). Why not? I was always going about with the first aid hand-out and reading it when I'm free. I got my certificate and took pictures with camp commandant and other key personality (Ogas at the top) Lol...*feeling cool*

- I was lucky the school I served in provided accomodation for corpers just at the back of the school. So I didn't have to pay T-fare to school. I appreciated this better than any money they could have paid.

- In my platoon on camp, I was the financial/treasurer. I was also the drama director for my platoon.

After camp, when I got to my CDS (EPS) I contested unopposed for the post of Financial Secretary and I served faithfully (yeah...lol). At the passing out of Batch C. I contested for the post of Provost 1 against a guy and I also won...hehehe two rounds as an executive, making me the only girl from the previous executive to serve again...*thumbs up*

- Due to some constrains I thought I won't be able to go for a the 3 month professional course in Entrepreneurship at CBN Enterpreneurship Development Center (EDC) even though the Director gave the first 100 corpers (in batch A) to get the form scholarship (I only have to pay for my certificate).

Anyways, taking bikes to go for afternoon classes everyday for the next 3month after working in my school, when I'm suppose to be resting wasn't a sweet idea. But as fate would have it a fellow corper in my school was also interested in the Business school. So we would take the same bike and share the transport fare.

Infact the school was fun, thanks to the wonderful lecturers there. As usual I was a group leader for two courses: Enterprenueurship Development, and Leadership... Wrote the exams, had an A in all the computer based exams. I aslo had the highest score in leadership: 94% (It was a tie though, another girl had the same score)

- Other significant things happened, I did a little business for a while, Sold wears and earrings for students in Benue State University. But I had to stop because of the risk of jumping Okada to and fro (especially after falling down on a moving bike twice, scratched my head in one, my jeans and shoe torn in the other).

- Though I complained of the State Government not paying corpers...when my BlackBerry phone spoiled, I was able to tax myself and bought an Android tablet and also saved to buy an Android phone and I later repaired my BlackBerry.

- One memorable thing was also my fellowshiping in Living Faith Church (Winner's chapel) it was by far one of the best phase in my life. I attended Shiloh 2014 (viewing center and had to sleep in church throughout). In my home cell I was made the reference point and tagged the 'the punctual corper' ....It was awesome!

- Apart from the normal NYSC certificate, I left NYSC with two professional certificate, one Skill Acquisition certificate in I.C.T, and a NEMA( National Emergency Management Agency) certificate of commendation from the Presidency, making five certificates *dancing*

For all these, I say all glory be to God. Looking back it's amazing how much we have or can achieve within a day, week, month and year, if only we can count our bleasing one by one. Focus on the good and be grateful!

Email ThisBlogThis!Share to TwitterShare to FacebookShare to Pinterest
Labels: Features