I heard a recent testimony of a family, they lived in a jointed flat with their neighbor. One day the family of three, mother and two kids, forgot their car remote control inside their car and went to sleep.

Somehow in the midnight the car engine started working and it began to release carbon mono-oxide into the house. Around 4:30am the eldest son woke up, feeling discomfort, he tried waking his mother and sister but they were unconscious, he dialed 911, and while talking on the phone he also passed out.

The emergency crew came in by brought them out, checked the neighbor and found out the neighbor and their 11 month old baby had also been affected. They were taking to hospital where they were all placed under oxygen, to remove the toxic carbon mono-oxide.

Now carbon-monoxide is colourless and odourless, they couldn't have perceived it.

I believed the boy that woke up to call 911 was waken by an angel. This is one the numerous gift of God to us.

Heb 12:22 - "But ye are come unto mount Sion, and unto the city of the living God, the heavenly Jerusalem, and to an innumerable company of angels." 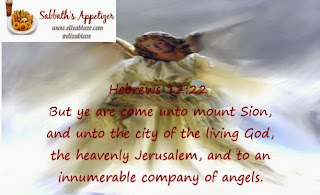 Some things happen so that we would know how to give all glory to God. The angel could of prevented the toxic gas from entering the house, and the family would have wake up in the morning and be like 'oh we forgot to off the car engine' and that could have been the end of it all.

But truly our guardian angels are working and we may never know what they have done, those things that were suppose to be tragic never happened to you because the angel of God prevented it.

Thank God for the amazing ministry of angels.

Next week I will share my own personal testimony of what I believed to be angels at work.