During the week, I happen to started reading the O magazine I bought some years back. I had bought but had not read it, I only went through all the pictures, and that's one thing I do a lot with magazines.

I bought the O magazine because it was Oprah's. When I started reading it I was amazed at how loaded and rich it was.

I discovered a legendary 13year old boy, Mattie Stepanek and the first part of the letter he wrote to Oprah which made her not to end her show at its 20th Anniversary is the bone of today's Sabbath's appetizer. I had to typed it out from the magazine. Read below:

Hello, it's me, Mattie...your guy. I am praying and hoping to go home around Memorial Day. It's not a guarantee, so I am not telling a lot of people. It seems that every time I try to go home, something else goes wrong.

The doctors are not able to "fix" me, but they agree with me going home. And don't worry, I am not "going home to die" or anything like that. I am going home because they can't do anything else here, and if I heal, it's because I'm meant to be heal, and if I don't, then my message is out there and it's time for me to go to Heaven.

I personally am hoping that my message still needs me to be the messenger a while longer, but that's really in God's hands. But anyway...I am only needing blood transfusions about once a week now, so that is better. And it sounds weird, but I think it's really cool that I have blood and platelets from so many people. Makes me related to the world in some way, which is a proud thing to be."

Mattie died at the age of 13years, but I can tell you his death was not in vain. 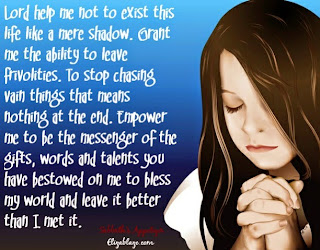 I know his life had, and is still inspiring a lot of people, of which I am one, this has made me to realize that God truly has His way of using we humans. Mattie was able to inspire a lot of people because of his condition. He was a true Messenger.

My prayer for we the living:

"Lord help us not to exist this life like a mere shadow. Grant us the ability to leave frivolities. To stop chasing vain things that means nothing at the end. Empower us to be the messenger of the gifts, words and talents you have bestowed on us to bless our world and leave it better than we met it."