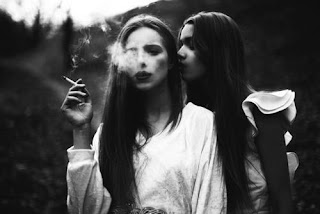 In primary school, my and I friends would grind chalk, wrap it inside a paper and blow it like we were smoking. From there I became curious, I wanted to step it up, so I'll cut a piece of foam from my mattress, fold it in a paper, light it with matches and smoke it.

Then one day I wanted to try it in my room when my siblings weren't around, then I mistakenly set the mattress on fire. And I got flogged. But that incidence ended that silly ambition for me.

I had another experience in secondary school, there was this friend I admired for the carefree atmosphere around her. One day I followed her to meet one of the school gardner, she gave the man money to buy cigarette.

Later, when the man gave her we went to the back of the hostel, she lighted one and started smoking. And after she was done she took a mentol sweet (TomTom). Even though I was scared of trying, she never even offered me so I was more of her watch dog that day...LOL

But then I'll look forward to be in the university, maybe then I'll have the boldness to be free from parents control, teachers and the whole good girl life. I yearned for freedom, I wanted life where no teacher or parent can scold me. A life where I can do as I want. A life of my imagination.

Then I got to the university and somehow I didn't get to attract the wild girls into my life.

Looking back I will say I had just enough moral that I had gotten from canes, teachers, parents and church. To guide me from going after the wrong lifestyles. And that was all I needed.
Just enough moral.