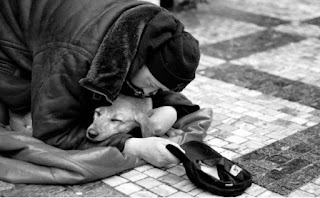 I was inside a cab when the radio program that was up happen to be the one where people call in to air their complaints. A man called and complained of how beggars disturbs people on the street.

He said most times when he is dropping from a motorcycle, he would be surrounded by about five beggars, he won't even know who to give money. He said he knows God like us to show mercy by giving to the less privileged, but this has become too much and he wanted the government to do something about it.

There were two women beside me, one confirmed how true the man's claim was, and even said some of this so called beggars are rich. She said she knew a woman who always come from another side a the city, would change her clothes at a corner every morning before going on her begging operations, she would even tell the people around her- "I hope my market will sell today".

Please what is she selling?

I have heard of old people who despite their children taking care of them, still goes out to beg! What a shame. Beggars have constituted so much nuisance that one doesn't even know who really need help again.

I have also come across well dressed people, lying to get money from me. They tell you they were travelling but realize they are short of funds. What baffles me is the fact that this corporate beggars speak good english and ain't in anyway disabled. I think this is more than greed or laziness. I think it's a disease.

Just how desperate can some human be when it comes to money?