Sabbath's appetizer- Write them down

There was a time in the university, around 2009 I happen to read about Anne Frank, and how her diary has given us insight into happenings during World War II, has being published and even read in schools now. It made me like the idea of writing down my thoughts.

Even though diary wasn't my thing. But I decided that after my devotion in the morning, I would write down the things that crossed my mind. But after some time I stopped.

Of recent I happen to go through my notes, and I discovered that on 4th of February, 2010 I wrote "I know that one day my writings will be read by the world if God willeth".

I probably meant the thoughts I was writing down then but I had stop writing and forgotten about it.

Then blogging hadn't even crossed my mind. But Now people read my writings. And I'm encouraged to press on.

"And the LORD answered me, and said, Write the vision, and make it plain upon tables, that he may run that readeth it. For the vision is yet for an appointed time, but at the end it shall speak, and not lie: though it tarry, wait for it; because it will surely come, it will not tarry- Habakkuk 2:2-3 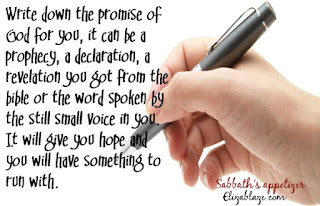 There are things that you will write down that you don't know how it will happen. I had something I wrote down and would repeatedly confess it because I love the idea but I got the full understanding of what it really meant two years after consistent mediation on it while watching a video! It hasn't happen but I still press on to it and when it does, I hope to remember to share it.

Write down the promise of God for you, it can be a prophecy, a declaration, a revelation you got from the bible or the word spoken by the still small voice in you. It will give you hope and you will have something to run with.