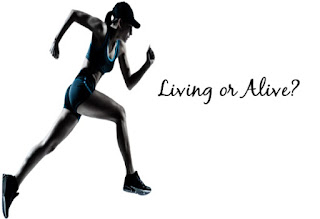 This post is another haha moment for me. I got the inspiration when a lady said; thank God we are alive and living.

Oh, then it dawn on me that there is a different between the two, one can be alive and not living. Let me add that one can also be living and not alive. Really? Relax while I break it down.

1. Health
Have you heard of some pathetic case of people in critical conditions who can't do anything, such as those in comma? They are alive, because there is breathe in them but they are not living.

2. Purpose
A person who has discovered purpose and is alive. Now a person who knows his or her purpose but is not working in it is merely alive but not living. Your purpose is the reason why you are here on planet earth, so until you discover and start living it, you are merely existing.

For example, a mentally impaired person roaming the street isn't living but you can say he is alive.

That a person is successful and wealthy in some area of life doesn't mean he or she is living. Isn't that the reason you hear news of multimillionaires, professors, e.t.c committed suicide? And you wondered what caused it.

3. Legacy
Here is where I have the table turned around. A person can be living and not alive. Look at men and women like Mahatma Gandhi, Mohammed, Rockefeller, king David, Bimbo Odukoya, Mother Theresa e.t.c.

Though they are dead but are living in the hearts of their followers. For example, I heard of a senator in Israel who questioned why we still celebrate King David after all the atrocity the king had committed in his days. It was said that the senator was immediately stripped of his position.

Now you see that someone can be dead but still commands a great influence on the living.

PS: Here is where I ask myself this life question; Elizablaze, are you living or just alive?.... Hmm it's not a one time question, it's a question you should always ask when a situation calls for it.