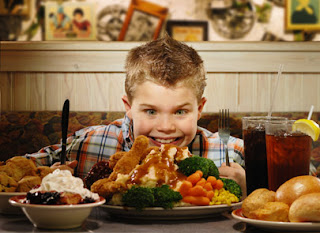 It doesn't matter if your kitchen, pots or refrigerator is stocked with food, there is still something about party food and buffets. Maybe it's because we get to eat different varieties of food for free or for a token, or how else can one better explain the sweet-bitter stories I'm about to share today?

I have noticed that while talking to people about an upcoming event, one of the questions raised is whether there will be plenty food. And I'm always amuse because these people happen to be those who can comfortably buy any food of their choice, so why the unnecessary excitement about food?... I will share below, the stories I heard recently where free food goes wrong.

An older female colleague told me this story of when she was younger, she was at a party where there was lots of meat and drinks. She decided to stick to soda (soft drinks) and snail meat. Because the party was overnight and the drinks were chilled, she ate and drank from 9pm to 5am. By the time she would count her bottles, she had consume twenty six bottles!

She said by the following day she knew she is in for trouble, the waist pain and diahorrea that gripped her wasn't from this planet...LOL. According to her she almost finished all the herbal drugs in the stores near her.

The second story is about a man who attended a one week conference, the first day at the venue he realized the lunch was a buffet, so he decided to eat more than his stomach could take. The following day he repeated the same thing. By the third day his colleagues noticed he did not come out of his hotel room, by the time they got to his room they realize he had been purging since morning.

To cut the story short, he couldn't continue the conference with them as he spent the remaining days on hospital bed.

I don't know if any of you have experienced any of the stories above and to some it may sound funny or crazy. If not that I heard this story from a confirmed source, I would thought it was a joke. But with the way I've seen people behave when it comes to eating free food (I not exempted... LOL). I can only hope we don't become like the characters above.