When you shouldn't 'see' yourself. 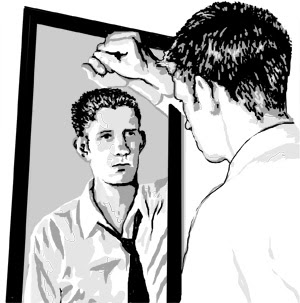 I will be sharing two people's testimony that has inspired me and I believe will inspire you too. Moreover it will help us in making better choice and choose to have a positive and a possibility mindset.

Dolores Osteen testimony.
In 1981 she was diagonalized of a terminal cancer. Even though she was sick and dropped weight. She did something unusual, she surrounded herself with pictures of when she was healthy.

When asked why, she said if she had to be heal, then she needed to surround herself with the images of how she use to be.

She was making the environment conducive for her healing!

Kemi Fakayode testimony.
While she was in hospital on admission her cousin's kids came to visit with her, she told her husband to take their pictures. Later after she got healed and saw the pictures she said she couldn't believed it cos the image of her that she saw looked like a grandmother.

She said if she had seen that picture while she was sick, she probably would have given up. She concluded by saying God did not allow her see herself.

I'm actually not going into the details of other faith things the two women above did but I decided to bring out the key quality they both shared.

Note: Yours may not be a sickness, it maybe taking chances and doing something that doesn't look like you are up to the task.

Let me say this: it is God that qualifies the called and he is the only one that can make a giant out of a Pygmy (dwarf).

Look only onto him.

Your means of explaining everything in this paragraph is in fact fastidious, every one be able to without
difficulty understand it, Thanks a lot.

Here is my web-site what is forskolin used for - www.soddosdlsd.com,

What i do not realize is in reality how you're not actually a lot
more well-appreciated than you may be now. You're so intelligent.
You already know thus significantly with regards to this topic, made me in my opinion believe it from numerous numerous angles.
Its like women and men are not involved unless
it's one thing to do with Woman gaga! Your personal stuffs excellent.
Always maintain it up!