I laughed in Spanish 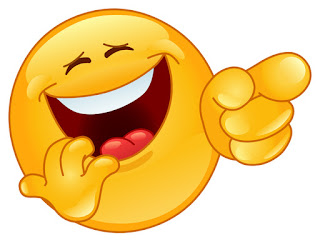 LOL...yes I meant the title because though I feel sorry for the characters in the story I want to share I'm actually laughing. It's not that I'm happy at their predicament, neither I'm I saying "good for them", but I can't help but to laugh in Spanish!

I don't even speak and neither do I understand Spanish! But I'm laughing in Spanish!

A friend once told me a story about a guy that did some shady deal for a politician and was paid about three million Naira. He bought a car of almost 2.8million naira, and an Apple laptop of about two hundred thousand naira! Had an accident with the car, sold the laptop to repair it. Money finished he became broke!

I feel sorry but I still laughed in Spanish... LOL

A man also told me of how he was at a place one time and a guy was talking about how he once hit some huge amount of money (I can't remember how he got the money), Spent the money on girls, became broke and was back to his workplace as a laborer.

The man who told me the story said the guy was even feeling cool and laughing while telling his story, he concluded by saying he felt like slapping some sense into him... Anyways, this story also made me laughed in Spanish.

P.S: In case you know anyone who came across a huge sum of money but wasted it like the prodigal son in the Bible, kindly share it with me, maybe I will laugh in French or Hindi...LOL

Lolz me i laugh in pidgin.... @the stupidity of some people..