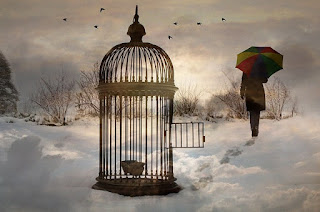 My younger brother was about 5months old and I was 3yrs old when my Dad travelled to the UK. For some weird reasons I never remembered those times he spent with us before he travelled (I feel a 3yr old child should have some early memories, I'm I right?).

He communicated with us through letters, and by the time I was in primary school my mum would take us to the house of my proprietress cos she had a telephone, that was how we were able to communicate till mobile network came to Nigeria and we had mobile phones.

About eight years later he came suddenly came back to Nigeria and that was when I saw the father I knew in pictures, he spent few months with us and went to stay in Lagos with his mother, to process his papers so he could go back to the UK. And from there he travelled back to London.

About another nine years later he came back to Nigeria. This time he was deported (a story for another day). He became depressed, I remember him talk about how he had struggled in the UK, how he's suppose to be a millionaire but now has nothing to show for it (hmm...my sister had finished from the university, my brother and I were in the university, we had built a house, I think he had something to show). About four months in Nigeria he committed suicide.

"My Dad never had to commit suicide before I could figure out my purpose on earth, but it did anyway"- Elizablaze

How did his death become a defining moment for me?

You see, even though my Dad was providing for us (he loved us and always give us what we requested). But I just wanted to be independent. I did a lot of businesses in school, sold kerosene, made beads, made and sold snacks, marketed products, network marketing and even repaired shoes!...LOL, they were profitable but they failed, I had this mindset that when I become wealthy I would be able to help a lot people. Therefore I was always on to the next business that I felt would be more profitable.

After my Dad's death I still continued my things, even though my mum was able to fill the gap. But there is one thing I do effortlessly and that is encouraging and inspiring people, it doesn't matter how things weren't going well with my businesses, I always have the right words to give people, so I had those who love to hear my opinion.

With the grace of God, as I matured I was able to set my priority right and know my power base. Now I don't need money to be able to inspire and encouraged people (my passion), I now understand that money can only avail me a bigger platform, but I don't need it to start.

My Dad loved to help people, but I feel he lost himself when he travelled to UK, as an immigrant (he tried to get his citizenship but fell in the hand of a scammer) survival and working for money became his priority, so that when he was deported he felt he had lost it all. He had left the country for so long that he didn't know how to fit in and start all over again.

Fear God, Build yourself and Live as a blessing to others.