The Devil, the foothold and the skyscraper 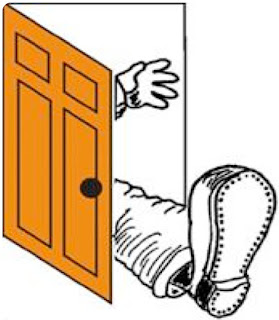 While I was growing up there is this common adage I use to hear the elderly ones say, "A lying Child will end up becoming a thieve and a prostitute" harsh I'll say, but when you take your time to think about it, you will realize the message they were trying to pass across.

Of course as a kid I have lied, but I didn't become a thief or a prostitute, I became an inspirational blogger!..LOL...OK let me be more serious, have you heard this saying; Don't give the devil a foothold?

You see, I have done things that started with 'just for fun', 'no big deal' and from there I had hurt myself and had been hurt. So what started with just a little fun, turned to a cry matter!

This is because when you give the devil a foothold, he won't move pass that one step you gave him, he would simply build a skyscraper on it!

Lets look at it this way, there was a recent news about a family of seven that was burnt to death in the night simply because the family and their neighbors who could have helped were quarrelling! And because they weren't on talking terms, the neighbors refused to come out and rescue them when they heard their outcry!

What a waste of lives! Simply because of quarrel (disagreement, unforgiving). Need I say I'm scared of giving the devil a foothold as I write this post.

My Dad after he went through some challenges, rather than shake it out and look out for a better life, gave the devil a foothold of depression, nothing could comfort or bring him joy. From depression he committed suicide.

A foothold can be anything, and definitely something you know that's not right for you but knowingly or ignorantly permitted it.

Just a glass of beer started some people's journey into being a bad spouse, armed robber and landed some their sack letter.

Don't be surprise that as little as a irresistible love for chocolates can be the foothold that the devil will build a skyscraper on (hmm...I don't mind a chocolate right now...LOL)

P.S: The devil may be your desires or someone you trust. It's not every time we hear the word devil that we should think of Satan, he's not with you 247, but you have God who is omnipresent with you all the time to help you.

Email ThisBlogThis!Share to TwitterShare to FacebookShare to Pinterest
Labels: Health and beauty, Lifestyles