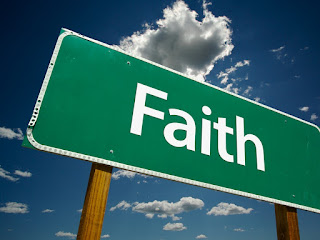 There was a time at the university when my friend told me how some occult members said they were able to achieve anything they wanted as far as they believed it. According to my friend he said 'believe' is the vital key they used.

Hmm... Well, I'll say the word 'believe' as been used and packaged in different terms, conditions and religions. Some call it the Law of Attraction and some call it Visualization.

In Christianity we call it FAITH. Therefore today I'll be talking on 'believe' as expected to be used by Christians.

Hebrews 11:1, gives a good definition that I'm sure many of us are familiar with: "Now faith is the substance of things hoped for, the evidence of things not seen."

The purpose of this post is to break it down and make it more clearer so that we can move from mere knowing to understanding.

Using the verse quoted above, we have faith been defined in two ways;

I'll say both definitions are almost the same, as both substance and evidence means something tangible (seen), while hope and things not seen means something intangible (unseen) that you want to bring into the physical realm.
For example, believing for healing from a disease is a hope, when you are healed, it is no longer a hope because we can all see and verify that you are healed.

But in the Hebrew's definition, something tangible preceded the intangible.
For example, before I got admission into the university, which was what I hoped for, my school leaving results, JAMB and Post UME result scores were my evidence and substance. So that if anyone ask me what made me so sure that I would get admission, I have those results to proof my eligibility for admission.

In Christianity the tangible thing (evidence) that we have is the word of God and the acts (testimony) of Jesus.

Therefore let me break down the elements of faith:

1. Hope: the thing you want or desires.
2. Evidence/substance/assurance: the word of God

With the above, I was able to defined faith as: The ability to hold unto (believe) a particular word of God for a specific situation, wants or desires (hope).

Therefore, when somebody ask you how strong is your faith towards that thing that you want God to do for you, it simply means how much do you trust God to perform His words in which your hope is resting on. 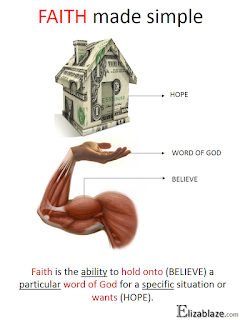 I made the pictograph above to further make you understand and remember, kindly share with others. Thank you as you do so.