The questions singles should ask before saying YES 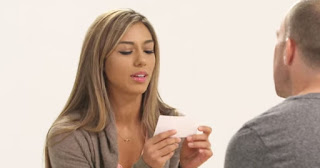 While on Facebook I saw a video link shared by one of my friends, he described it as funny so I decided to download it. I actually found it hilarious and at the same time intriguing.

In the video, Creflo Dollar speaks on the questions single ladies and guys should ask before considering a relationship. At first, I found some of the questions ridiculous but after watching it over and over I was able to connect it to some things I knew before. Therefore, I'm sharing three major questions out of all the questions he raised.

As far as we humans are concern we will always have something that will make us angry. Isn't that the reason Paul said in Ephesians 4:26- "Be ye angry, and sin not: let not the sun go down upon your wrath"

You see, I know a lady who when infuriated can throw anything at you without been conscious of whatever it is she's throwing. There are many people like that, it is in their blood, so I think asking that question isn't a bad idea... Hmm you don't want someone pinning you to the wall with a knife before he or she realises their bad.

2. Who are you attracted to? Male or Female?

When I heard this question I first taught it sounds ridiculous to ask a guy if he's attracted to men, after all he must have approached me because he's attracted to me. But Creflo Dollar said you should ask, who knows maybe he or she is trying to hide something by wanting to marry you.

I once watch a shocking interview on Oprah show, where a couple confessed to a secret they were both hiding from each other, and it's the fact that both were attracted to the same sex.

Now, wisdom tells us both of them married each other because they were trying to hide the gay part of their lives, they both deceived each other without knowing. Well, it is good that no one was hurt when their secret was out since both of them are gay.

3. Do you have a Career and a job? How long have you been working?

Moreover you don't want someone that will turn you to the alpha and omega of their needs.

Note: I can't guarantee that your partner will tell you the truth when you ask those questions, but I'm sure knowing the truth will save you some future stress.

You can watch the video below: