Courage is a gift 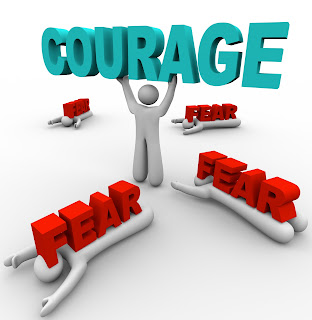 After our final exams in school, all the final year students in my faculty danced round the university environment as a form of celebration. By evening, though tired I and some friends decided to attend an all night christian program to celebrate and be prayed for.

Who was I not to go? I was already wondering what the future holds for me after school, such program was very welcomed. The next day was my birthday, so by midnight a friend of mine who was also at the program sent me a birthday text message. It reads:

"Your gift will pave way for you, nations will need your services, leaders of the world will ask for your advice, Kings and Queens will beg for your presence and great men will serve you"

That was the best birthday gift I got, no materials gift could beat that. So I kept the text on my phone and memorized the wordings for use as my daily confession.

I am not a talented singer, writer, artist or dancer. If I was topping my class I would have concluded I have intellectual gift. With no notable artistic abilities I could call a gift, yet I never stop confessing that birthday text.

Looking back, I asked myself how come I can do some things I never knew I had in me before. Then I realized the gift I had use so far which had helped me to wake other sleeping gifts was courage.

It takes courage to overcome my fears, to start writing even though I didn't study literature in higher institution. It took courage to start and grow along the way.

I remembered when I went for a skill acquisition training in Video Editting, the instructor needed someone to act as a presenter, he called me out, and I did what I knew how to do. He was impressed and I became the one who presented anytime we wanted to shoot a talk show. Later, when it was time to nominate a group leader I was voted. At the graduating ceremony I was awarded the best student in the class.

Every position and office I had ever hold was because of courage, and I'm sure the ones I will hold in future will require courage.
Courage is a gift.

"I learned that courage was not the absence of fear, but the triumph over it. The brave man is not he who does not feel afraid, but he who conquers that fear." - Nelson Mandela

Wow that was strange. I just wrote an really long comment but
after I clicked submit my comment didn't show up.

Grrrr... well I'm not writing all that over again. Anyhow, just wanted
to say excellent blog!