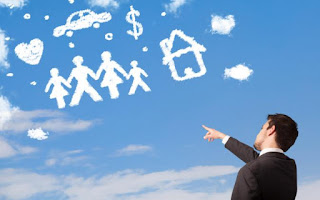 I believe everyone of us imagine things. As far as your cognitive abilities and brain is intact, you should have imaginations.

But the difference with each of us is that our imagination varies.

At the beginning of the year, one of the important messages I heard was creating a vision board. In things like this, it is common to hear words such as visualization and imagination.

I think the book titled "The Secret" by Rhonda Byrne that talked about the 'law of attraction' just made visualization popular.

You see, the law of attraction is just one of the many laws that operates in this world. I do have my imaginations but I do not really sit down to say I want to 'visualize', then bring out a pen and start writing things down on how to achieve that particular mental image.

I am not criticizing it, because it has definitely work for people who has gotten the concept right.

There are two kinds of vision, the created vision (mental images) and the revealed vision. The difference is that the former is made-up by man, while the later is inspired and as such divine in nature.

When a person says I followed my instinct, that is an example of an inspired vision. And when a person forms an image of a red car in his head and eventually bought a red car, then you know that is a created vision.

Well, I think that is as simple as I can explain the two types of visions so that you can better understand them.

By nature (brain setting) we all visualize, even though we all don't practice it consciously as per the law of attraction.

For anyone who has heard of visualization and wants to practice it, I will recommend you first settle down and ask yourself what is your purpose in life.

Purpose is the core of every human. Everything you become is suppose to align with it. I say this because we are creative beings, created for a purpose.

And as such we are so powerful that even God acknowledge that we can do anything we imagine. But you don't want to be on the fast lane, heading towards the wrong direction.

After you have discovered your purpose, you can rightly judge, and follow your instincts and mental images as far they align with your purpose.

I hope you got it? Happy visualization!