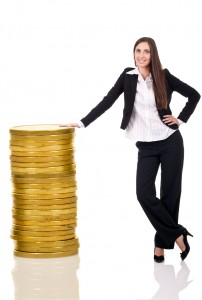 While a few of us gathered together to discuss practicum in psychology, our discussion drifted to money or passion as a motivation for starting a business.

And while some of us felt passion should be the main motivation, one of us said if we knew how much people earn for homosexual sex, we would not think about passion. He then said people earn as much as a million naira.

Although we joked about it and one of us jokingly told him he would end up using pampers to support his anus if he ever decides to make his money that way.

I think this just tells me how desperate many of us can be for money. A colleague once said he knew a girl who said she could do anything for money to be in her pocket.

I will not stand here and say the desire to make more money is evil, money is good and cool for a lot of things. If I had certain amount of money now, some of my prayer points would change, but I am not desperate to the point that I will do just about anything to have it. Why?

Because money is a means to an end, not an end on itself.

I once read of a man who went about in rags and died of malnutrition, but it was later discover he had over twenty three thousand dollars in his money belt that could afford him to live large and healthy.

Sometimes ago, I was seated in the customer service section of a bank, awaiting to be attended to, an old woman walked in with a bulky black nylon in her hands, she asked some of the officials to help her count her money and fill her teller.

But two of the officials refused on the ground that they were busy, while the third official, who wanted to consider dropping what she was doing to help the woman, took a look at the contents inside the bag, made a surprise face and said the money is too much for her to handle.

After the woman left the section in search of who would helped her, one of the officials who had rejected the woman told his colleague how the woman used to come with big money, and one of the security guys would help her count her money and fill her teller. But the day twenty naira went missing out of the money, the woman (I guess after she took her copy of the teller home for confirmation) came back to the bank to make a scene.

He said you would not believe it was this same old woman who looked pitiful that caused such a stir in the bank. Therefore, because of that, the bank officials have stopped helping her. They concluded that if she can't get any of her children to count her money and fill her teller, then they were ready to watch her take her money back home.

And there I was, initially pitying the woman and wondering why the officials wouldn't help her. Now, I still wonder what an old woman, who was obviously illiterate, who came with no escort was doing alone with such amount of money.

Looking at the way the old woman was dressed, it was obvious she was saving money she may never spend.

Like I said, money is a means to an end. Many people are desperate to have money for causes that aren't worth it. What do I mean? 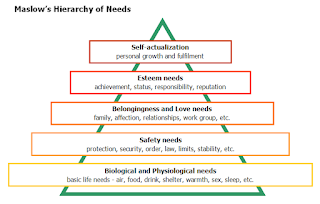 Looking at Abraham Maslow hierarchy of needs, we can suggest people who are desperate to have money are trying to fill these voids.

Let me explain it in the order of the hierarchy of needs.

1. Physiological needs:
Some are desperate to gather money so they can enjoy the basic of life, probably they were deprived of them when they were young because of poverty.

2. Security:
Because of the fear of poverty, some are gathering money as a form of financial security, simply because they are afraid of being broke. They live a frugal lifestyle but are contented with having loads of cash 'breathing' in the bank.

3. Family and love:
Some believed their families, love interests will accept them if they have more money.

4. Ego and Esteem
Some believed people will respect them if they become wealthy, while some believed being wealthy is the same thing as being successful.

5. Self actualization
Some are desperate to do anything to possess money as they think wealth will make them feel fulfilled in life.

I think trying to gather money simply because of these is like living an unreal life. At the end of all the monetary accumulations, one will never be satisfied.

"The reality is they can't make a bazzillion, dazzillion garment to wrap around the value of you are"

Discover purpose, pursue creativity and create something of value and money will find you.