What that particular sperm cell and egg says about you 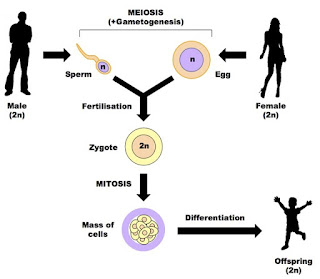 While walking with one of my female colleagues, we started the femininity talk and it drifted to why abortion is rampart among young ladies. We tried to reason it out from different angles, and even though we shared some differences and at the same time some related views, in the end we both concluded that foolish girls get pregnant for stupid boys and as such laughed it off.

I'm quite aware that this issue has generated heated arguments in many countries and the debate is still on as to whether it should be legalized or not, but I am not about to dwell on that.

This post is actually about YOU, whose development in the womb was not terminated or killed off before or after birth and as such has a chance to life.

You see, some times ago while I was thinking about the concept of human development right from the fertilization of the ovum, the uniqueness of each female eggs and male sperm cells that came together to form a being, intrigued my interest.

While working as a biology teacher, teaching genetics was something I found interesting, and taking developmental psychology at my masters level thus made me more interested in what happen at conception and afterwards.

I have come to conclude that every female eggs and male sperm cells are unique on their own, and as such their coming together to form a living being was by a divine selection.

And as such, every biological siblings, even though they shared similar DNA are unique in their core being.

Isn't that the reason God told Jeremiah "Before I formed you in the womb I knew you, before you were born I set you apart; I appointed you as a prophet to the nations". The word 'formed' used by God also signifies the uniqueness of the sperm cell and egg that came together to form Jeremiah.

That particular sperm cell fertilized that particular egg and gave you this precious gift of life for a reason, and I pray you discover your specific purpose and live your life to the fullest...amen!