Let me show you a great way to live! 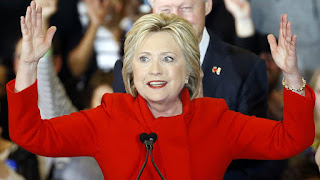 I recently saw the interview of Hillary Clinton with Oprah Winfrey, on her 50th birthday. The interview was dated 18 years ago, yet the discussion is still very much valid and relevant today.

Hillary said her calling is one of the motivating forces in her life and she said it is a great way to live. And upon this thought line, I based today's post.

Hillary Clinton is now 68 years old, and has risen to become the first female candidate to be nominated for president by a major U.S. political party! And Oprah Winfrey who anchored the interview, who has said in numerous times that her purpose is to help people connect to their calling, is still very much as influential as ever!

You see, except rapture happen, you and I will still be very much around for a long time. And if you want to be relevant, then you need to have a mental agenda (discover your purpose), therefore, purpose discovery can never be over emphasized.

We now live in an age that is filled with many craziness, where many people are focused on how to acquire the basic things of life, money, materials, positions and power. They have probably forgotten or maybe are ignorant of this golden word "seek first the kingdom of God and other things shall be added to you".

This is not religion call, it is a "purpose call". In psychology, there are some theories of creativity that stood out for me, because I could see it operation in the lives of many notable people, and somehow this has defined the way they lived and how many of them died.

And because I am very much interested in the concept of creativity after purpose has been discovered I can't do but dig into it, if not for anything but to empower myself, yet I can't also do but share it with you as I feel inspired.

For now, still on the importance of purpose discovery, I will say that as a biopsychosocial system that we are as human, your purpose is the main force that can hold you together. What do I mean? Let me explain in this short sentence:

"A man who can't seem to get it right with his family and work-life (social), can end up being depressed (Psycho), takes into drugs and alcohol, become addicted till one day, his medulla oblongata can't take it anymore and it short down, he dies (biology)".

Maybe you are still wondering how purpose discovery can help you hold it together, your purpose gives you root. You are not just standing but you are rooted in something. A person who has discovered purpose will exhibit a purpose-filled behavior and not an erratic behavior that is birthed from environmental contingency.

In conclusion, we don't need a seer to tell us that Hillary Clinton did not dabble into politics because her husband is also a politician. It is her calling, her biography testifies to it.

This is not a campaign motivated post for Hillary Clinton as president of the United State of America, it is another post to tell you that if you want to maintain your creativity to always be relevant, have a lasting influence and forever leave your print in the sand of time then living a purposeful life is a great a way to live.