Don't go back for garlic! 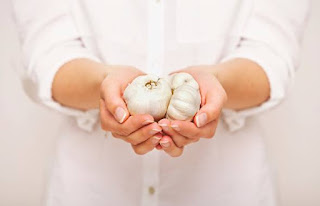 I once enrolled at a training program, the program had different sections, mine was makeup and native headgear tying. I had enrolled because I wanted to do my makeup right. But it happened that as I was leaving the training venue, I passed by a group that were being trained on catering and for a moment I asked myself why I didn't register for catering. Ask me why?

Nothing significant drew me to that group than the delicacy I saw, coupled with the aroma that was emanating form it. Then I remembered the reason I had signed up for the makeup class and my interest vanished. You can call it the power of food but I learnt something from that short event.

After observing a self employed young man, I asked him how he copes and if there are days he wish he had a job, he smiled and we got talking, he told me the challenges that he faced as a self-employed but he said anytime he feels like that he remember what his pastor once said, "...it is like the children of Israel desiring to go back to Egypt because of garlic"

"We remember the fish, which we did eat in Egypt freely; the cucumbers, and the melons, and the leeks, and the onions, and the garlic. But now our soul is dried away: there is nothing at all, beside this manna, before our eyes".- Numbers 11:5-6

Garlic? Melons? Cucumber? They say what?

The event with the children of Israelites sounds ridiculous but it happened, and it is still very possible. It was obvious they had forgotten that the reason they were eating manna was because they were no longer a slave. Moreover the manna is just for a while, they would soon eat meat as much as they wanted when they got to their God promised land, as a free man and not as a slave.

I have heard of people who finds it difficult to leave a well paying job to do their thing because their salary comes steady and handsomely. Well, I am not saying everyone should be self-employed, I am rather saying everyone should find out their life purpose and stick to it. If yours is in working at a particular sector of an organization, stick to it and make your impart!

In conclusion, I will say the question you should always remember to ask yourself is this "why am I here?"