Life is a game, you must be a smart player if you desire to win 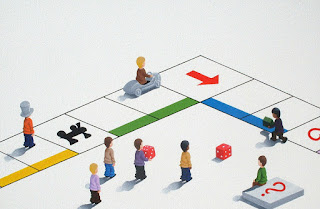 I remembered when I was posted to Benue state for my youth service, I had tried to work my service to my base so that I could continue working at my former place of work and save the NYSC allowance, but that was not to be, I was posted to a place where I had no relatives and knew nobody. Yet I knew one thing!

Life had already placed me in Benue state, but I can decide my place of assignment. I knew it was either I was posted to the state capital (Makurdi) and enjoy the city life with its opportunities or I am posted to ANY of the villages where there was little or no amenities and opportunities. Therefore, I had three weeks in orientation camp to workout my fate.

I met people who had consoled themselves that they don't mind been posted to a village, according to them they can save much of their allowances as they have heard that villagers are nice to corp members and provides them with food stuffs. I am not sure I can survive a whole year living a dull life because of money and food.

Three weeks I had! Benue state is not really much of an industrially developed state, so It is either I go to the city or I wake up every morning in a village angry and full of complaints.

I had four options in the camp to network myself for the city.

There were several options, but to save myself from stress, enjoy the three weeks orientation and achieve my goal of been posted to the city, those were my choice. Let me share how it worked out for me.

1. Becoming a leader
I knew I can't get to camp, be naive and just move about with the crowds as we followed different orders. I need to know the officials, maybe they can influence my post to the city. The first person on the platoon list automatically becomes the leader except he or she rejects the office, while the second person become the assistant. I was the third on the list but there was two other positions left, the financial secretary and the sport director, I nominated myself for the financial secretary and I was accepted.

As the financial secretary I was able to interact with everyone, collects and give out money, involved in decision making and interacts with some of the officials.

Leadership is an opportunity to serve and to connect. See it this way, a server at a party knows the people controlling the dishes, probably enters the kitchen and store room, he knows what is happening around him and as such has information. Even if it is just saying "hello" "enjoy your meal" to everyone (including the big shots on the high table), the smart ones can connect wisely. And he can do all these because he is serving.

But been a leader was not enough, it seems the officials already had some pressure on them from people who also wanted the city. So I had to workout other means.

2. Join the OBS
During my undergraduate years I anchored a program on the university radio station. So before I left for service my sister told me to join the orientation broadcasting service (OBS), as there is a good chance that members would be favored. I went there for interview but I was not picked. Ops!

3. Extracurricular activities
I heard those who did well in any activity would be penned down for the city. Back home I was in the drama ministry of my Church so I offered to be the drama director for my platoon, I wrote the script and directed it. After our drama presentation, our names were written down but the competition was too much for me to relax on that (we were almost two thousands in number).

4. Joined the Red cross
I had another reason for joining the Red Cross, and it was to escape the stressful activities on camp. The parade and the different exercises was very intense. Our song was "under the rain and in the sun".

The soldiers were hard on us and I watched as some of us collapsed due to the rigorous exercises. I figured out it was better to be part of the groups carrying those that had fainted and massage the legs of those with fracture than to be one of the victim, thankfully, I was not too late to apply and I was accepted.

The red cross was my saving grace. The coordinator initially thought I was not serious because I was always taking excuses during the afternoon to attend drama rehearsal. Then one day, during our training he asked for those who could demonstrate how to revive an unconscious person, though I had not been a member of red cross prior to camp, but I had seen him demonstrated it to us before I zoom off for drama rehearsal, so I raised my hands and demonstrated it on one of us who acted as a patient.

He was very impressed for the fact that I was the first person to put up my hand, especially because I was always going for rehearsal, he then announced that they needed some of us in the state capital but we have to write the Red Cross certification exam. Of course, the exam was not for all, but I was listed among those that would write the exam.

After we got the material to study, I had just few days to prepare, but since I was no more involved in the rigorous evening exercises, I had the strength to read at night, in fact I was always going about with it during the day, and it was no surprise that I topped the exam, and it was also no surprise that I was posted to the state capital.

Life is like a game, it takes smartness and creativity to play and win. If you must play then you must have a goal that is birthed from purpose as it takes tenacity to stick to your goal.

I never regretted that I served in the city of Makurdi, I was able to make good friends and connections. I saw life in different dimensions and I enjoyed it. It is true I was not able to save, I had virtually no savings. But about a year and half after the experience I was called that I came second in the state award competition I had participated in then, and got much more than I could have saved then. Play smart so that you can live the life you love!

You're really an inspiration.... Many people should get to know you.

You're really an inspiration and the write ups I've read are very timely. Many people should get to know you.