The invisible gun by your head 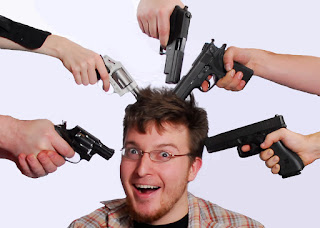 Quite a number of times, I have heard someone say "nobody placed a gun by your head to do this" I have also said it to a someone before. But now, with my knowledge in psychology I'll say those times that we did things that made others to question our sanity after we committed certain acts, there is an invisible gun by our head.

Who is pointing that gun? What is that gun?

Anytime when we are faced with situation where we cannot express our assertiveness, then it is probably because of the invisible gun; the fear of rejection.

I remember the day a friend wanted me to cover a lie for her and I refused, although I knew what the implications would have been for me if I had told a lie, it was something I called "better imagined than experienced". I knew I did the right thing and I had people who supported me, in fact, if I had lied, I won't have been the only one in trouble, I would have caused the rest of the group to suffer because I was the leader.

Yet, I was concerned with the attitudes she gave me afterwards. I am sure someone would have said, who put a gun on your head to lie or say the truth? Nobody, I would say. So why on earth was I bothered?

Those words by Rick Warren struck me, and it has become one of my watchwords.

A friend also recently told me about a girl who assumed she was in a relationship with a man who never asked her out, but because they were very close and people already knew them together she felt she had found her true love. After about three years together the man came out straight and said they were just friends.

As expected the lady was devastated, but one interesting thing was that the signs were there and she saw them, but she was not assertive enough to ask "what are we doing?" She kept assuming and waiting on the guy. A good question would be: who put a gun by your head and told you to stay in that fake relationship? Isn't that what we ask victims of domestic violence and people whose boss kept victimizing and harassing them?

During my youth service, while we were on camp, I remembered how the soldiers would teach us self defence, therefore I know it is possible to defend and free oneself from this evil gun. And it is possible when you can identify the person holding the gun and what type of gun he is holding, but in most cases the person we see as our enemy is not the one holding the gun.

For example a man who is unhappy with his job, and goes to work everyday with the fear that the company may one day foldup and he may be implicated because of the atrocities been perpetuated by his boss, may find it difficult to leave the job due to the fear of staying jobless, thoughts of the number of years he had spent on the job may hold him down. Moreover the thought of the family members who depends on him or the fear that he may lose his relevance among his club members and society if he should leave the job can keep him in bondage. As you can see, his boss is not the one holding the gun!

When you can't be assertive, be yourself and do what you know you should do because of others or situations, even if it is a blackmail, then you should know that there is a gun by your head, though it is invisible but it is powerful and it can kill you. Is there anyone or people currently holding a gun to your head? And what type of gun is it?

Or are you the one pointing a gun to yourself?