Cognitive flexibility, a must have skill for smart people 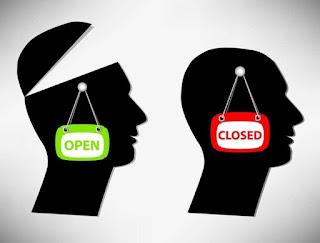 One day, during a discussion with some of my colleagues, a lady told me that if she ever tuned to my channel in future and saw a particular guy(name withheld), she would turn off her TV.

How open is your mind?

Can you be seen talking with a society labelled 'bad egg'? I will say it depends. There is a difference between interviewing a 'bad egg' for the purpose of extracting some vital information that would be of benefit to my audience, and me sitting down with a 'bad egg' as a friend. The former is work, the latter is clique. But a person who is close-minded would not even dare to move near that person for whatsoever reason.

Some people are currently struggling with their career and finance, not because they refused to take certain risk, but because they lack the cognitive flexibility which is the same thing as being open-minded. Even when you try to convince them, they will never give you an ear, that is probably why they are not smart or creative.

Cognitive flexibility is a skill, it is one of recommended skills for this era and for future era. Some are naturally endowed with it, while some need to learn and imbibe it. It doesn't mean you have to go with everything that comes your way, but rather that you are open to a new way of getting a better, faster and cheapest way to achieve your desired result.

Some of the barriers to being open-minded includes, jealousy, fear, insecurity, culture, low self-efficacy and many more. But I believe any forward thinking individual or anyone who desires to make an impact in other persons lives should adopt this skill.

Anytime I meditate about the subject of creativity, I love to play with this scripture: "For by him were all things created, that are in heaven, and that are in earth, visible and invisible, whether they be thrones, or dominions, or principalities, or powers: all things were created by him, and for him: And he is before all things, and by him all things consist". Col 1:16-17.

You see, I dare to apply those verses with being open-minded, because like Solomon, I will also say there is nothing new under the sun, don't get it twisted, there is nothing new to God, because he had created everything. But there is something new to us because the next creative product and innovation exist in the invisible state (idea state) and God drops it in our heart or makes it fly around for those who would grab it as he wills, therefore it takes those with an opened mind to grab them and bring it to the physical realm. And the cycle continues.

When it comes to being open-minded as a life management skill, I will advice you to have a sieve at the opening of your heart. I believe the gift of discerning of the spirit and the word of God according to the Bible are powerful tools for sieving things, situation and life occurrences.