President Trump or Hillary, I know someone who is not bothered 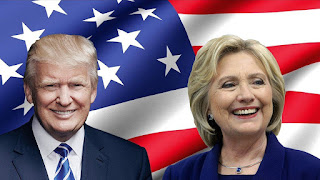 It is no longer a news that the United State presidential election result came as a shocker to many of us, and I read the several headline that talked about the uncertainty that welcomes Trumps victory into the Whitehouse.

Trump is the new president elect, so what?

Yet, in all these different shades of hope, I know someone who is not bothered. Be it Trump or Hillary, it does not in anyway affect him, and if at all he is concerned, it is probably because he feels sorry for those who had taken upon themselves the headache that comes as a result of too much of joy or worry.

He is not bothered because he is smart. He is smart because he has learnt to own his work-life. Smart enough to see life as a game, that requires some smart strategies. It doesn't matter what anyone thinks or says, as long as he lives he will continue to do well and learn to do well for himself.

Someone is probably thinking, "oh, you don't know what you are saying, they'll make policies and laws that will affect us all!"
Yes, they will, but for a smart person, he or she can always use the policies to further enhance his dreams. Not to kill his or her dreams.

Let me get this straight, being smart is not a function of good or bad works. Though it pays to do good works, but the fact that you are a good worker does not mean you are a smart worker. You can be a bad worker and yet be smart. But I will say again, it pays to be a good and smart worker.

What makes the difference?

This means that although a young woman can have a vision of herself been the CEO of her organization, policies may be passed that seems to favour the male gender and that can cloud her vision. But when she has a revelation of herself has the CEO, it doesn't matter the operating policy, she sees everything as working for her good.

Still on the united state election result, looking at the good and not too good reactions to the result, I can only wonder why some people feels the next four years (or eight years if the president elect decides to go for a second term), will dictate or summarize their whole life, be it for good or for bad. Let me say the next four, eight or fifty years, of whoever is the president should not determine your life. Let God, your creator determine your life and let Him forge your path.

I love what Donald Trump said in his victory speech, where he said he has seen that a lot of Americans have untapped potentials in them that needs to be developed and that he wants to take on the works of helping every single americans realize their fullest potentials. Yes, everyone of us has unique and innate potentials in us that needs to be brought out. And it is therefore left for every United State citizens to be open minded enough to allow the newly elect president do this good work for them.