You are not an illegal immigrant, you are a global citizen 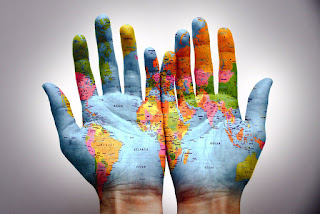 I listened and watched as many people reacted to the united state president elect, Trumps decision to deport the millions of illegal immigrants back to their homeland. Those who have their loved ones in the united state are worried, while some have taken it upon themselves to mock those immigrants.

I listened to Trump said he wants to developed the potentials of people in the united states, and I guess in doing that he wants to flush away those who he perceived can be an hindrance to the good work. This made me feel sorry for those people who saw United State as their green pasture and ticket to a good life, because I feel that if the leaders who are in control of governance and economy of their home country had invested in potential development, they probably won't decide to live in USA.

You see, shortly after I clocked three years old, my father travelled to United Kingdom, he spent approximately about 17yrs in the country, all the while trying to process his citizenship papers but eventually he was deported and that led to his depression and death. He was a banker before he travelled, like most immigrants, he thought oversea has what he needed to be successful in life.

Well, I am not angry at the country that deported them, nor am I angry at the lawyer that kept duping him of his money and lying that he was working on his papers and I am not even angry with my Dad for thinking UK is the answer, and the decision which led to his early death. I don't have the energy to be angry at anyone, I only have the energy to invest in myself and make a better decision for my life.

As for me, never will I make any country, nation, policymakers and president my answer! I will rather live, work and have my being in God thereby becoming a global citizen rather than becoming an illegal immigrant.

I believe that the fact that you are a citizen of a country by birth does not mean you cannot become a legal citizen of other countries, after all, heaven is the only place who's citizenship is of greater importance, but you should not slave-up to live in a country, work and own business in that country.

Why should anyone control or take away your meal ticket, ego, self worth and self efficacy because you perceived them to be god? People wants to associate with an individual who has done well for him or herself. Like Trump as decided to developed potentials of united state citizens, you should also invest in doing that for yourself especially because no one can help you if you do not help yourself.

In conclusion, I will appeal to all the leaders and people in esteemed position all over the world to invest in people and potential development. And as for those who are afraid of deportation, I'll tell you, that is not the end to life, but rather a step to discovering purpose and working in alignment with it, and see if any country will not want to associate with you and welcome you, because you will no longer be called an illegal immigrants, but a global citizen.